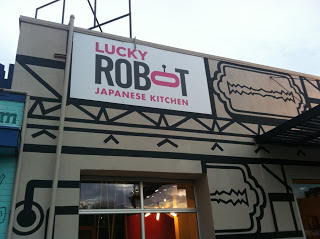 Lucky Robot Japanese Kitchen opened just over a week ago with a fun creative menu and iPad ordering system.

Each table is quipped with an iPad which allows customers to scroll threw the menu, lookup ingredients and allergen information, place orders, page a waiter, pay their bill and log into Twitter and Facebook. Keeping with the iPad theme you will find the appetizers under the App Store portion of the menu which has items such as Japanese street corn and crispy Brussel sprouts with lemon grass soy. 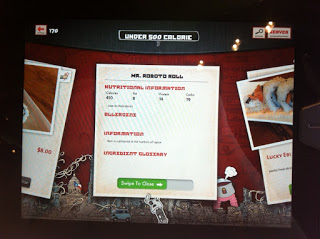 The best seat in the house is the sushi bar where the skillful Chef Jay and crew will transform pieces of fish into delicious rolls, nigiri and sashimi.

I tried the Mr. Roboto roll and the Electric Eel Roll. Mr. Roboto has lightly seared white tuna, fresh jalapeno, pickled cucumber, avocado, a touch of cilantro and spicy mayo. A fortunate mistake, they accidentally served it with lemon grass soy instead of mayo. This mix of ingredients made for a delicious roll. The Electric Eel is an assumingly simple roll of eel, avocado, cucumber and sesame however the lemon grass soy glaze gave it some serious zest!
Chef Jay bragged up the sashimi so I had to give it a go. The hamachi was perfect cuts of tender fresh yellowtail and some of the best I have had.

The pot of ZHI Tea I ordered was a great accompaniment with my sushi dinner. Next time I look forward to trying the Japanese Devil\’s Tail which are shooters of habanero infused sake, lychee, pineapple, lime and chipotle sour and served up in hollowed out cucumber. They also serve Main Root Soda, Juice, wine, beer, sake and most notably sake punches.